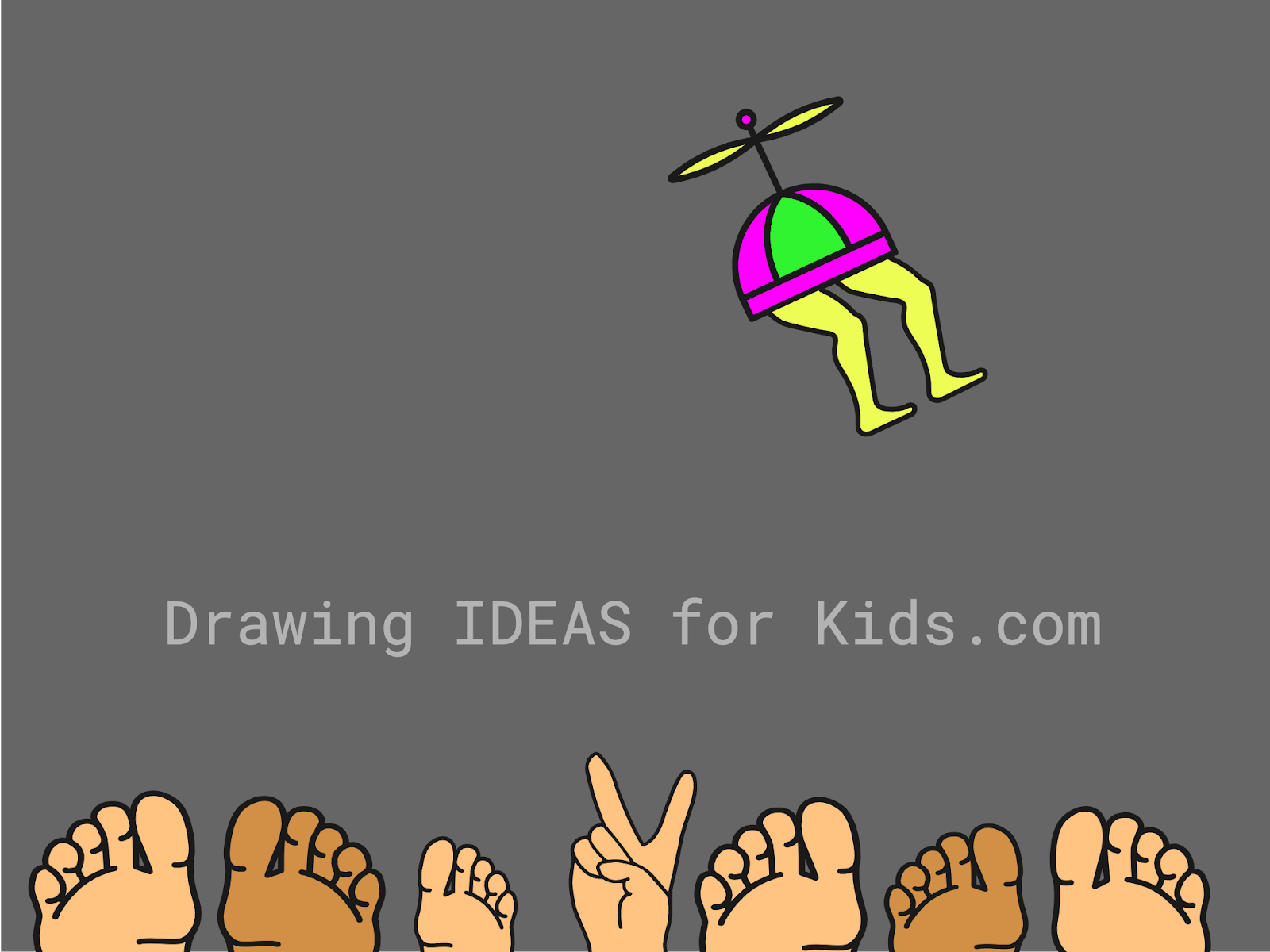 Have fun drawing without being able to draw! 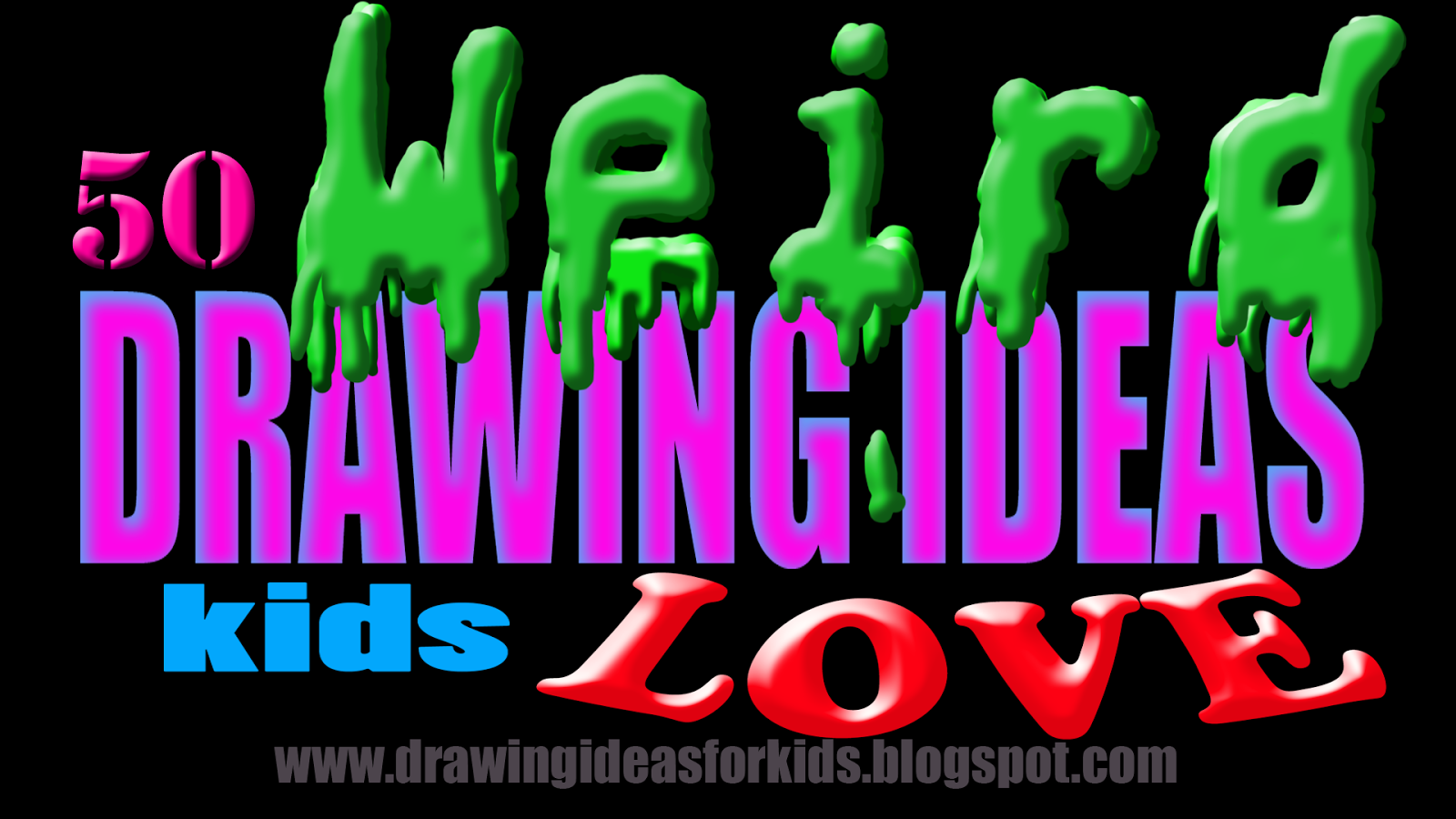 Here are some classroom tested drawing ideas that kids love!  They get weirder as the list gets longer.

1.  Draw a jelly doughnut fighting an onion bagel on top of a building.  The building should have three windows and a sign on it.

3.  Draw a giant hand.  The hand should be picking up a car.  In the car draw a bunch of cows screaming or mooing.  You decide.  Add three other animals to the picture.

4.  Draw a giraffe taking a bubble bath.  Draw the bath tub in the middle of the ocean.  Draw sharks surrounding the bath tub.  Draw three other things swimming in the water.

6.  Design a cereal box for  Sludgiee-Os. Include a drawing of the cereal, an ad for a free toy, and a happy child eating the cereal.

7.  Draw a carrot wearing a tuxedo.

10.  Draw a person with an octopus on his head.  Draw the octopus with a top hat.  Draw a fish in a bowl on top of the top hat. 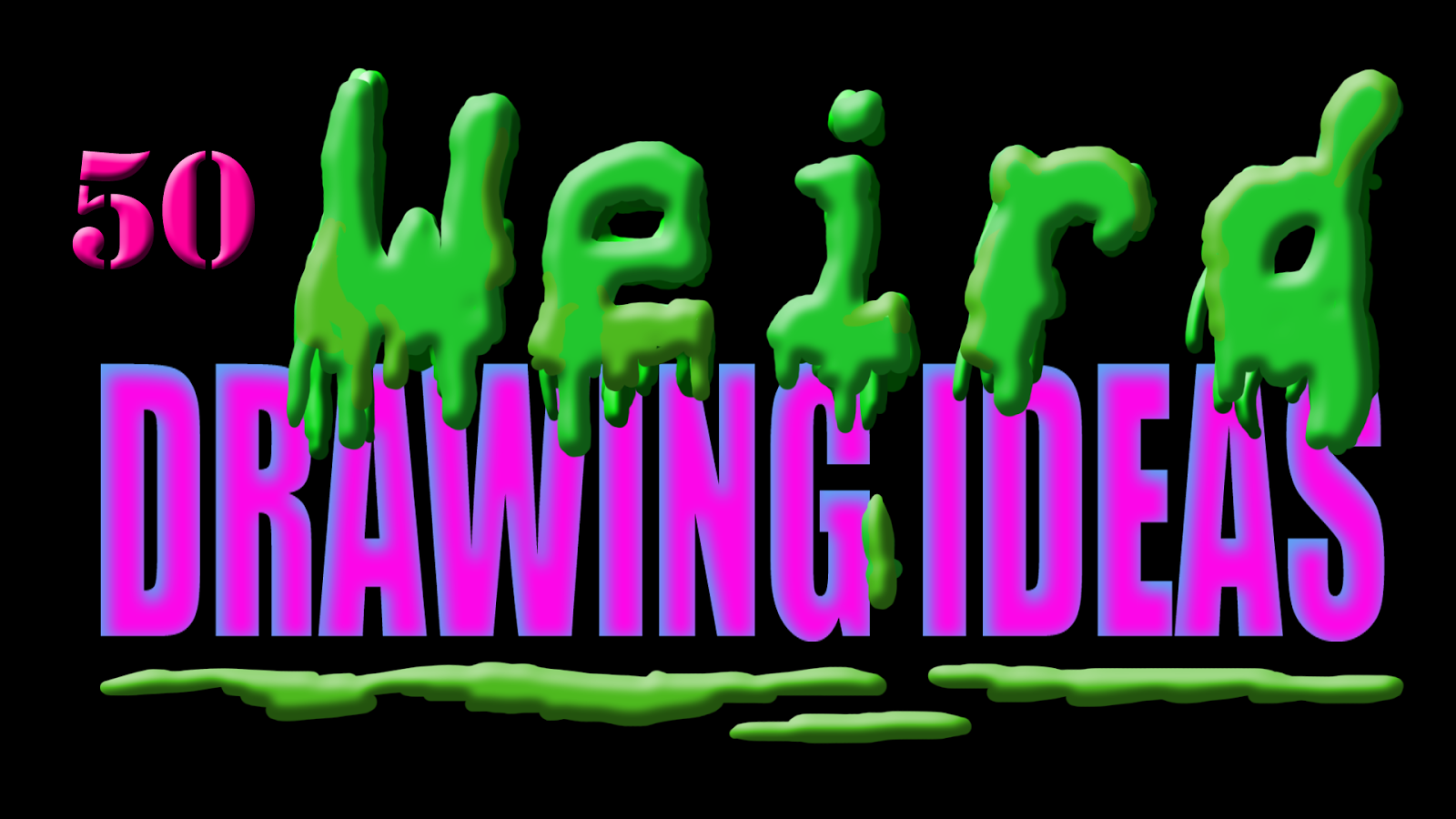 11. Draw hairy creature feet.  Draw the feet on the bottom of your paper and draw the legs stretching off the top of your paper.  Draw only the feet.  Draw thousands of hairs covering the legs.  Have fun drawing each hair.  Draw them with energy! After you draw them.  Go over them again with more hairs.  Imagine each hair is the most important part of your drawing.

13.  Draw a monster looking at his reflection in a mirror.

18.  Draw a picture with this title: Aliens on the Farm!

19. Draw a portrait of the Invisible family eating dinner.

21.  Draw a picture of a farm, but you aren't allowed to use any curved lines.  Curved lines are for wimps.


22.  Draw a family of monster hanging in your closet.

23. Draw a Flexamagoogin.  You know exactly what it looks like, stop worrying.

24.  Draw an alien with three heads, one foot, six arms and a six mouths.  Put a fancy shoe on the alien and a funny T-shirt.

26.  Draw a picture with nothing but strait lines. 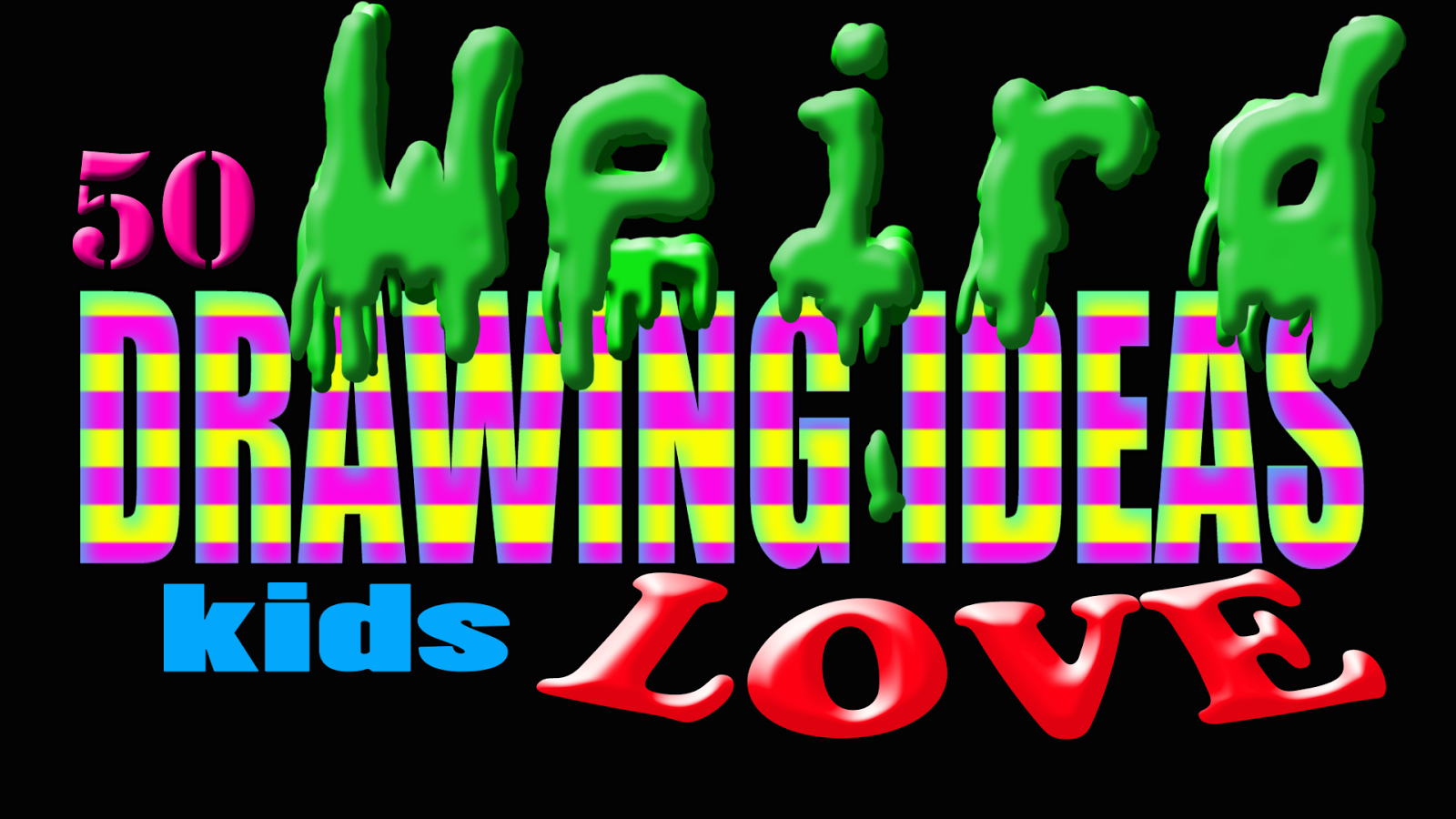 28. Draw someone or something climbing a giant stack of pancakes?

29. Draw a new animal that is a combination of five other animals.  Your animal has to have a tail.  The tail should be holding something.

30. Draw a pencil talking to a student who is sitting at his desk in school.

31.  Draw a puddle with a monster crawling out of it.

35.  Draw a portrait of the Gross Family.

36.  Draw a portrait of the Angry Family.

37.  Draw a portrait of the Weird Family.

38.  Draw a portrait of your family but turn everyone into the vegetable that he/she most resembles.

39.  Draw two creatures playing a game against each other.  One of the creatures should have seven eyes.  The other creature doesn't have any eyes.

41.  Draw the monster that lives under your bed, but don't show his face.  Draw scales.

43.  Pretend it is your job to design the ultimate Ice Cream Truck.  Draw what it would look like.

44.  Draw an alien in a bedroom pretending to be a lamp.

45.  Draw a picture of a homework machine.  Show how it works by drawing the insides of it.

46.  Make a drawing of your dream birthday party, include: rides, the most amazing cake ever created, ice cream, presents, a giraffe, games, people wearing funny hats and streamers, lots of streamers.

47.  Invent YOUtopia draw a picture of it.  Create an original flag of YOUtopia.

48. Invent 10 silly signs and draw them on a silly road to Sillyville.  Draw silly cars.

49.  Draw a giant plant growing under a bed with a person sleeping in it.

Kids love to draw but around the age of nine they start to worry about art.  Is it going to look real?  Is someone going to laugh at my drawing?  I'm no good?  These are all the things kids start to think about artistically.  It is around this time that some kids develop a fear of art!  They start to say things like, "I can't draw!  I'm not artistic!"  I've seen how the results of this fear in adults.  I can't tell you how many adults I have met who refuse to show anyone things they have drawn.  I've worked with a lot of teachers who refuse to draw in front of their class.  This fear of drawing harms people. Drawing is not art.  Drawing is a tool used to create art.  Everyone needs art to express themselves.  Don't let someone else steal the joy of creating for you or your child.

Kids can not be allowed to get caught up in this because they will stop creating.  If one person says, "That doesn't look like a cat."  Some kids shut down all together.  In my opinion, this comes from cookie cutter art.  This can be seen in most elementary schools.  Look at the walls.  Every picture is exactly the same.  Is this art?  Is this creativity?  Luckily, students can learn to love to create even if they can't "draw."  The just need the right drawing ideas to help them get started.

The following activities are so intriguing to students that they don't care how their drawings look because they sort of level the playing field.   Ideas become more important than the artwork.  Kids start to have fun with art and just create for fun's sake.  And guess what?  When they have fun, their art starts to look good!  Give it a try!  I dare you!  I dare you to try one of these drawing ideas for kids and tell me you don't smile, tell me you don't laugh, tell me you don't have fun!

So, how do you generate drawing ideas?  If you are looking to come up with drawing ideas, the secret is to just get started doodling.  The more you draw the more ideas you will get.  I always here students tell me that they can't think of anything.  The truth is that there is too much to think of, just start putting thoughts down on your paper and you'll get ideas for pictures.  Stop worrying about creating a drawing and have fun and you'll never run out of clever thoughts and ideas for drawing.